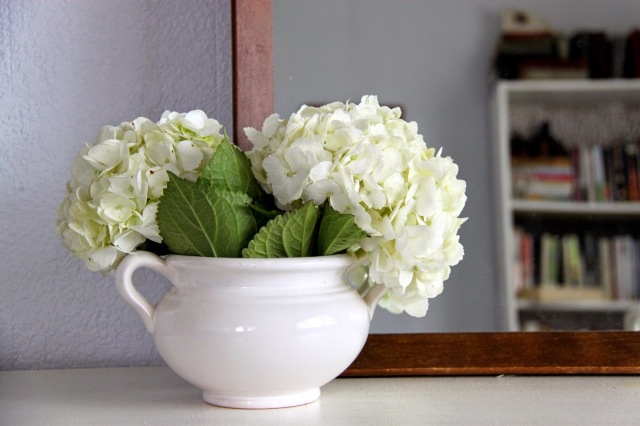 It feels strange, this coming back to my blog after such a long time and after so much has happened and so much life has been lived. It feels like there isn’t much to say at times, or when there is, I don’t have the where-with-all to write, and so it sits quietly. Of course, when I do have the occasional brilliant thought (ha), it is when I’m up to my elbows in dishwater, or in the sandwich line or somewhere else that I can’t get it written down. And then when I re-visit the same thought later on, turns out it wasn’t so brilliant after all 😉
Spring is here! I bought a fluffy bunch of hydrangeas this morning to celebrate. Greenery is returning, along with fresh energy and the assurance that God hasn’t forgotten us in our winter brownness and deadness.
I have enjoyed the long winter evenings and have gotten a good bit of reading done. Nothing completes a day like a chapter of a good book, or a few favorite lines from somewhere.  Here’s evidence:

These books have to be among my favorites, which might explain why I revisit them so often. I bought Freckles at our local thrift store for $.25. I may or may not have happy danced in the aisle and totally turned the rest of the bookshelves up-side-down in case the person who gave away such a find may have given more of the same sort. A little exaggerated maybe,but I was supremely happy for a few hours. Gene Stratton-Porter writes with such soul, and such feeling and her books are some of the few that make me cry. For example: 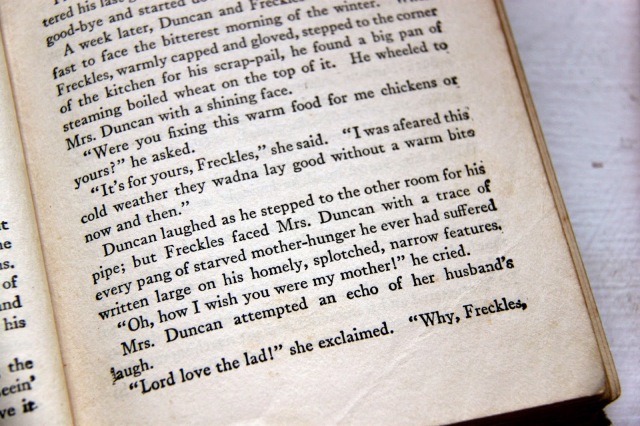 Doesn’t it do something to you? Mother-hunger. Something most of us never feel because we never experience its absence. The themes of these books are so true, and so pure and honorable without being priggish or stuffy. Real manhood and womanhood are celebrated in their wholesomeness and unaffectedness. That last word isn’t actually a word but it wants to be there so it stays. 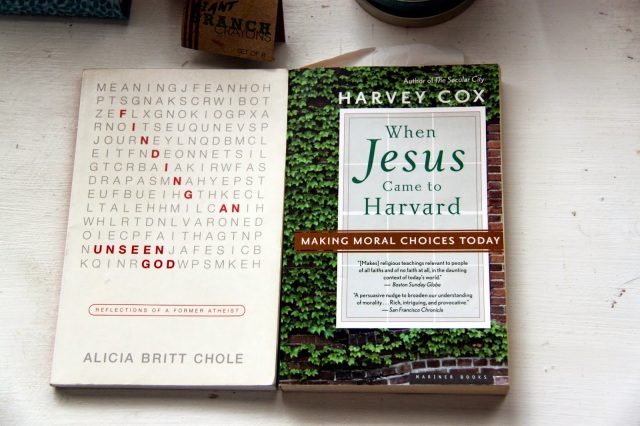 The next two books are good reads as well. I blogged before about these, but I want to bring attention to them again. When Jesus Came To Harvard is heavier reading, and I had to consult the dictionary numerous times, and there is some theology that I am not sure about, but it is still worth reading. The author taught an undergraduate class on the Person of Jesus of Nazareth, and the book is about his experiences in class as they walked through Jesus’ teachings and revisited His life.

My book is all marked up with question marks and high-lighted lines, and even a grammatical goof 🙂
I highly recommend the other book to anyone who is interested in apologetics or rubs shoulders with people from other religious worldviews. It is the story of a young atheist lady who met two happy, friendly Bowheads (these girls wore the ridiculously large hair bows of the 80’s). This is her story of living without God and her unexpected encounter with His Presence, and how it changed her. It is engaging, interesting, educational and extremely well written. Be my guest and read it, please?!
And to be honest now, and to talk about a book that I wasn’t so fond of, meet:

This is an extremely popular book. A poll from last year showed that it was the second favorite book of American readers, just behind the Bible. It was set in the South, back in the Civil War, and I frequently see memorabilia or references about this. When my sisters and I were in Charleston, our historic carriage tour took us past a Rhett Butler home. A few years ago, part of our vacation rental was decorated with Rhett and Scarlett. Clearly, this is a popular, well-loved story. I picked up the book one evening and read most of it that night. In literary terms, it has some value. The fact that Scarlett (the main character) was a southern belle and was not beautiful, but was loved for her keen mind and spunk, is noteworthy. And I understand its value with the civil war backdrop and the excellence of the writing. The plot, however left me both sad, and a bit mad.
Basically, Scarlett is in love with a man (Ashley Wilkes) who is to marry his cousin Melanie (because that’s how the Wilkes’ did). In retaliation and to get his attention, Scarlett marries Melanie’s brother, and shortly thereafter becomes a widow as he is killed in war. She then marries two more men, the second of which is Rhett Butler, a fiery, determined man, in whom she meets her intellectual match. Through all of this she makes Melanie’s life terrible because she still is in love with Ashley Melanie is nothing but kind and sweet in return and on Melanie’s deathbed, Scarlett realizes she really isn’t in love with Ashley after all, but her very own husband, Rhett. By this time though, Rhett has grown tired of her whims and isn’t sure if he still wants her. And the story more or less ends there.
Some observations:
I see enough heartbreak across the headlines each morning to make me feel heavy, without reading a fictional work of the same sort. Scarlett intentionally wreaked havoc with many hearts, nearly wrecked another marriage, and wasn’t happy in her own. She wanted everything she couldn’t have, and carelessly trampled others in her quests for love. Why do Americans appreciate this? Why is she so popular? Melanie should be the hero for her selflessness and love to a lady who was bent on undoing her.
There is some racial slang and epitaphs that I can not approve and do not wish to read.
Scarlett bore 3 children, none of which she loved or wanted. She was disappointed to learn she was pregnant. I can’t celebrate even the fictional life of someone so self-centered and whose value of children is so low.
I could write more, but this was more on my throw-across-the-room-into-the-trashcan pile than- to- be read again.
That is my honest and candid review. I would love to hear your thoughts on this book, even if they are totally different, or on any others. I would also love to hear suggestions on what to read after this book comes:

And finally, a parting shot of my favorite pencils. I think maybe Freckles was originally written in something similar? 🙂